Hunter’s long and complex list of ailments, combined with her mistrust of the health care system, make her an incredibly difficult and expensive patient to treat. But she is exactly the kind of person California intends to prioritize under an ambitious experiment to move Medi-Cal beyond traditional doctor visits and hospital stays into the realm of social services. Under the program, vulnerable patients like Hunter will be assigned a personal care manager to coordinate their health care treatments and daily needs like paying bills and buying groceries. And they will receive services that aren’t typically covered by health insurance plans, such as getting security deposits paid, receiving deliveries of fruits and vegetables, and having toxic mold removed from homes to reduce asthma flare-ups.

Over the next five years, California is plowing nearly $6 billion in state and federal money into the plan, which will target just a sliver of the 14 million low-income Californians enrolled in Medi-Cal: homeless people or those at risk of losing their homes; heavy users of hospital emergency rooms; children and seniors with complicated physical and mental health conditions; and people in—or at risk of landing in—expensive institutions like jails, nursing homes, or mental health crisis centers.

Gov. Gavin Newsom is trumpeting the first-in-the-nation initiative as the centerpiece of his ambitious health care agenda, and vows it will help fix the mental health and addiction crisis on the streets and get people into housing, all while saving taxpayer money. His top health care advisers have even cast it as an antidote to California’s worsening homelessness crisis.

But the first-term Democrat, who faces a Sept. 14 recall election, is making a risky bet. California does not have the evidence to prove this approach will work statewide, nor the workforce or infrastructure to make it happen on such a large scale.

Gov. Gavin Newsom speaks about homelessness in Oakland in early 2020.

Critics also fear the program will do nothing to improve care for the millions of other Medi-Cal enrollees who won’t get help from this initiative. Medi-Cal has been slammed for failing to provide basic services, including vaccinations for kids, timely appointments for rural residents, and adequate mental health treatment for Californians in crisis. Yet the managed-care insurance companies responsible for most enrollees’ health will nonetheless be given massive new power as they implement this experiment. The insurers will decide which services to offer and which high-needs patients to target, likely creating disparities across regions and further contributing to an unequal system of care in California.

“This will leave a lot of people behind,” said Linda Nguy, a policy advocate at the Western Center on Law & Poverty.

“We haven’t seen health plans excel in even providing basic preventative services to healthy people,” she said. “I mean, do your basic job first. How can they be expected to successfully take on these additional responsibilities for people with very high health needs?”

This revolution in Medi-Cal’s scope and mission is taking place alongside a parallel initiative to hold insurance companies more accountable for providing quality health care. State health officials are forcing Medi-Cal managed-care plans to reapply and meet stricter standards if they want to continue doing business in the program. Together, these initiatives will fundamentally reinvent the biggest Medicaid program in the country, which serves about one-third of the state population at a cost of $124 billion this fiscal year.

If California’s experiment succeeds, other states will likely follow, national Medicaid experts say. But if the richest state in the country can’t pull off better health outcomes and cost savings, the movement to put health insurers into the business of social work will falter.

When Newsom signed the “California Advancing and Innovating Medi-Cal” initiative into law in late July—“CalAIM” for short—he celebrated it as a “once-in-a-generation opportunity to completely transform the Medicaid system in California.” He declined an interview request.

The approach is known as “whole person care,” and insurers will be required to assign patients a personal care manager to help them navigate the system. Insurers will receive incentive payments to offer new services and boost provider networks and, over time, the program will expand to more people and services. For instance, members of Native American tribes will eventually be eligible to receive treatment for substance misuse from natural healers, and inmates will be enrolled in Medi-Cal automatically upon release.

The insurers—currently 25 are participating—will focus most intensely on developing housing programs to combat the state’s worsening homelessness epidemic. The state was home to at least 162,000 homeless people in 2020, a 6.8% increase since Newsom took office in 2019. 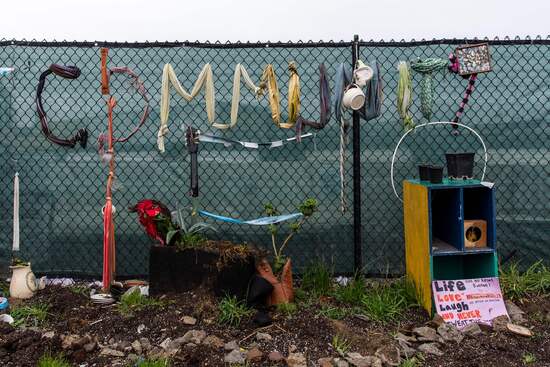 A community garden near an encampment in Oakland

Jacey Cooper, the state’s Medicaid director, said all Medi-Cal members will eventually be eligible for housing services. Initially, though, they will be available only to the costliest patients. State Medi-Cal expenditure data shows that 1% of Medi-Cal enrollees, many of the homeless patients who frequently land in hospitals, account for a staggering 21% of overall spending. And 5% account for 44% of the budget.

“You really need to focus on your top 1% to 5% of utilizers—that’s your most vulnerable,” Cooper said. “If you generally focus on that group, you will be able to yield better health outcomes for those individuals and, ultimately, cost savings.”

State officials do not have a savings estimate for the program, nor a projection of how many people will be enrolled.

The plan, Cooper said, builds on more than 25 successful regional experiments underway since 2016. From Los Angeles to rural Shasta, big and small counties have provided vulnerable Medi-Cal patients with different services based on their communities’ needs, from job placement services to providing a safe place for a homeless person to get sober.

She argued that data—even though it is not comprehensive—is enough to prove the initiative will work on a statewide scale.

However, studies of similar programs elsewhere have yielded mixed results. New York provided housing services to high-cost Medicaid enrollees with chronic diseases and mental health and substance use disorders and found major reductions in hospital admissions and emergency department visits between 2012 and 2017, and saw a 15% reduction in Medicaid spending.

“We found we just couldn’t help people with housing as quickly as they needed help,” said Kathleen Noonan, CEO of the Camden Coalition of Healthcare Providers. “Many of these clients have bad credit, they may have a record, and they’re still using. Those are huge challenges.”

But it will take time. California will have five years to prove to the federal government it can save money and improve health care quality. Insurers will be required to track health outcomes and savings, and can boost services over time or drop programs that don’t work.

So far, the regional experiments have failed to serve low-income Black and Latino residents, according to the interim assessments conducted by Nadereh Pourat, director of the UCLA Center for Health Policy Research. She concluded that they have primarily benefited white, English-speaking, middle-aged men.

Cooper said the statewide initiative will tackle “systemic racism,” initially as it targets homeless people, who are disproportionately Black.

Consider Eugenia Hunter, who is African American, and whose many untreated mental and physical illnesses, intertwined with her addictions, mean it will take a herculean effort—and cost—to get her off the street.

Hunter has been homeless for at least three years. Or maybe it’s five; her mental illness clouds her memory, and she erupts in anger when pressed for details. She eases her frustration sometimes with sleep, sometimes by smoking crystal meth.

A stack of unopened health insurance letters sat beside Hunter one evening in late August. Her eyes were glassy when she struggled to remember when she received a cancer diagnosis—if she ever did at all.

Health insurers will not be required to offer social services to patients like Hunter because federal law requires nontraditional Medicaid services to be optional. But California is enticing insurers with bigger payouts and higher state rankings.

“We are asking the plans and providers to stretch. We’re asking them to reform,” Cooper said.

The state is urging insurers to start with the roughly 130,500 Medi-Cal patients already enrolled in the local experiments. To prepare, they are cobbling together networks of nonprofits and social service organizations to provide food, housing and other services—much as they do with doctors and hospitals contracted to deliver medical care.

Services will vary by insurer and region. The Inland Empire Health Plan, for example, will offer some patients home repairs that reduce asthma triggers, such as mold removal and installing air filters. But Partnership HealthPlan of California will not offer those benefits in its wildfire-prone Northern California region because it doesn’t have an adequate network of organizations equipped to provide those services.

In interviews with nearly all of California’s Medi-Cal managed-care plans, executives said they support the dual goals of helping patients get healthier while saving money, but “it is a lot to take on,” said Richard Sanchez, CEO of CalOptima, which serves Orange County and will start modestly, primarily with housing services. “The last thing I want to do is make promises that we can do all these things and not come through.” 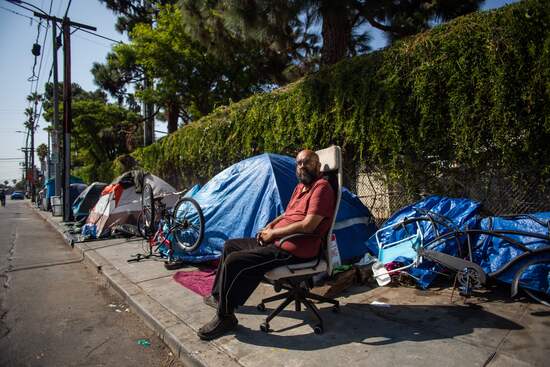 Can CalAIM help people like Albert Martinez, who has lived on the streets of Los Angeles for 20 years?

Nearly all the health plans will offer housing services right away, focusing on three categories of aid: helping enrollees secure housing and rent subsidies; providing temporary rent and security deposit payments; and helping tenants stay housed, like intervening with a landlord if a patient misses rent.

Partnership HealthPlan, which serves 616,000 Medi-Cal patients in 14 Northern California counties, will prioritize its most at-risk enrollees with housing services, food deliveries and a “homemaker” benefit to help them cook dinner, do laundry and pay bills.

“It’s a great deal of money for a small number of members and, frankly, there’s no guarantee it’s going to work,” said Dr. Robert Moore, the plan’s chief medical officer. “We are building something extraordinarily ambitious quickly, without the infrastructure in place to make it successful.”

“When somebody has congestive heart failure, their diet should be structured around alleviating that chronic condition,” he said, explaining his plan to offer patients healthful food. “What are we going to do—let them eat ramen noodles for the rest of their lives?”

In Alameda County, two plans are available to serve Hunter. The Alameda Alliance for Health, a public insurer established by the county, and Anthem Blue Cross, a private insurance company, will expand housing services.

“People like Eugenia Hunter are exactly who we want to serve, and we’re prepared to go out and help her,” said Scott Coffin, CEO of the Alameda Alliance, who is also on a local street medicine team.

In one moment, Hunter angrily described how health plans have tried to enroll her in services, but she declined, mistrustful of their motives. In the next moment, fighting back voices in her head, she said she desperately wants care.

“Someone is going to help me?” she asked. “All I want to do is pay my rent and succeed.”

This story originally appeared at Kaiser Health News. It was produced by KHN, which publishes California Healthline, an editorially independent service of the California Health Care Foundation.

The UK terminates one of its data exchange agreements with Palantir

England-Belgium closing? Highlights of an epic spherical of…

Two congressmen sneak in on a visit to Afghanistan that…

DACA recipient, who wrote the history of the Rhodes…

Texas and Oklahoma to the SEC — The history, the drama…